The Known Unknowns of Preseason 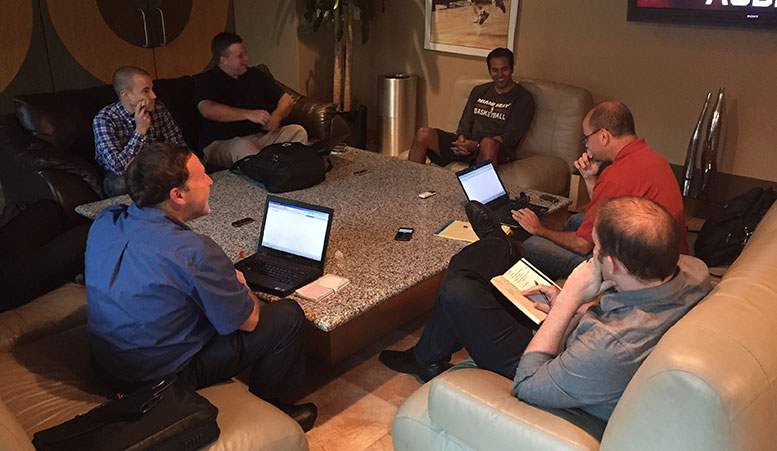 One of the good things about veteran players, one of the things that makes them so attractive to executives and coaches beyond their leadership and experience, is that they tend to be known quantities.

With so many veterans on the Miami HEAT roster this year, then, Erik Spoelstra should certainly know his players. There’s far less information with which to profile a Justise Winslow, Josh Richardson or even Tyler Johnson, but by and large the rotation players have proven their strengths on a professional floor.

Most of them just haven’t done it together.

Sure, we’ve seen a Dwyane Wade-Chris Bosh pick-and-roll a couple thousand times. We just haven’t seen it happen with Goran Dragic on the floor, much less with new additions such as Gerald Green and Amar’e Stoudemire. Each fresh body adds an only-partially-predictable new variable to the situation, and for a coaching staff trying to design a scheme all those variables serve to render good chunks of information useless.

“Putting together our plan for this season, we had to use a lot of different avenues to try to process the information,” Spoelstra told a group of beat writers.

We can talk all day about how certain pieces should fit together, about how Wade and Luol Deng will look cutting off the ball while Dragic and Bosh run a pick-and-pop at the right elbow as Hassan Whiteside lurks on the glass, but there’s too much we don’t know right now. There’s value in knowing what you don’t know – hey, it’s better than being oblivious – but the uncertainty, exciting as it can be, is limiting.

After a year-plus of roster flux, it’s tough to expect the on-court product to look the same, strategically, as it used to. A year ago this time we were talking about how, despite the departure of LeBron James, the HEAT could likely start Chris Bosh and Josh McRoberts in order to maintain their positionless, inverted-offense look.

Now, with Whiteside and Stoudemire in the mix with Bosh and McRoberts healthy, Spoelstra has a few more conventional lineups to play with.

If conventional means anything these days.

“It might not as be as conventional as what you think,” Spoelstra said. “If you asked 10 NBA people what that means, 10 NBA people would define that in 10 different ways. The word I am using is pace. This team has to get the ball up the floor, get into our actions with decisiveness, clarity and pace. Whether that translates into us being in top Top-3 of fast break points, it may or may not. It will benefit us to get into our spacing, play with pace. Playing with a slower, methodical pace doesn’t do that as efficiently.”

Even with a more traditional frontcourt, however often or occasionally, the team still won’t look normal.

While it’s easy to look at all the names on the roster and say this should be a very good team, what we really know is what skillsets are going to be available. Miami has some of the best attacking guards in the league in Dragic and Wade, two of the best cutters in Wade and Deng, one of the best pick-and-roll players in Bosh and two of the best interior finishers in Whiteside and Stoudemire. That’s a pretty great place to start, at least on the offensive side of things.

Defense is a bit trickier to figure out. Tempting as it is, speculation on that end is best left in the wind. Even the coaching staff doesn’t quite know which direction things will go in.

What do we know now that we didn’t a day ago? Unlike last season, the HEAT are going into camp with a healthy roster. Other than that, not much. We know that much is still to be determined. A wide variety of outcomes are in play. And the coaching staff still isn’t going to put any player, lineup or team in a box.

“You’ve got to be able to adapt in this business,” Spoelstra said. “To figure out what your strengths are and maximize those, and minimize your weaknesses more than other teams. That’s the challenge. We will play some conventional basketball in some people’s eyes, at others we’ll use the versatility and flexibility of our roster to play positionless. The practices and games will tell us.”

What else is preseason for?