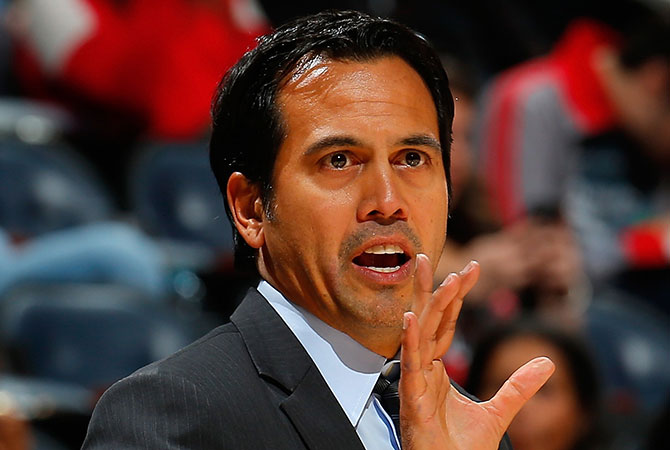 To get an early assessment of the Miami Heat’s potential this season, you could’ve picked any number of individuals to examine in their season opener against the Charlotte Hornets.

You could’ve focused in on Hassan Whiteside. The Heat big man is as unpredictable as he is crucial for this team, but if he can be a consistent force, Miami could contend in the Eastern Conference.

You could’ve watched Dwyane Wade, the same way you’ve watched him for years, checking for signs of healthy knees.
Chris Bosh, coming off the pulmonary embolism that cut his last season short, and Goran Dragic, beginning his first full season in Miami, were also intriguing subjects, along with the new additions like Gerald Greenand rookie Justise Winslow.

But the real person to study during the infancy of the Heat season is the man who’s managing all these pieces, coach Erik Spoelstra. The man who can legitimately play 12 actual NBA-caliber players on any given night, as opposed to last season, when he was forced to play as many as eight players who are currently not on an NBA roster (Michael Beasley, Henry Walker, Shawne Williams, Shannon Brown, Justin Hamilton, Andre Dawkins, Zoran Dragic and Danny Granger).