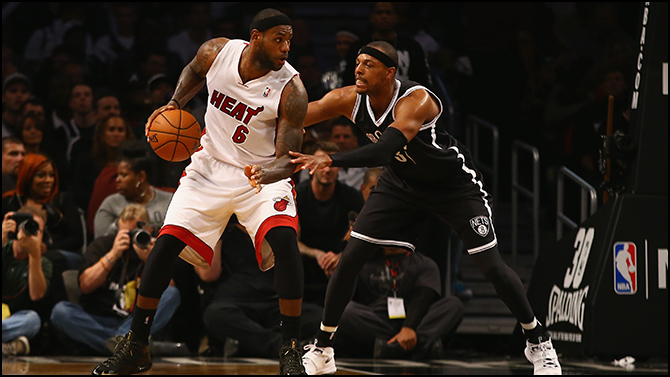 Over the past three years, much has been made of the developmental strides taken by LeBron James and Dwyane Wade in the post. James has gone from a low-usage, high-efficiency post-up player lacking a wide variety of moves to possibly, accounting for passing and playmaking, the most complete post player in the league. And Wade tends to score more points for every one of his post-ups than almost every other guard in the league. It’s a dynamic tandem, one deadly efficient enough that Erik Spoelstra has been able to construct a large portion of his offense from the outside-in, with ballhandlers catching the ball behind the first level of defense as taller players space the floor around them.

Each player deserves credit for advancing their individual skills over the past three years, but the HEAT’s post success hinges on more than just drop-steps and hook shots. You don’t often begin a post-up with the ball in your hands, which means it’s up to someone else to deliver it where and when you want it. Throw the ball to an elite scorer on the perimeter and ask him to score if you want – a post-up requires a team.

The simplest way this manifests itself is in the where.

Here, you’ll see Dwyane Wade and Chris Bosh initiate a pick-and-roll on the right side of the floor. With players of this caliber running an action it would be easy for the other three offensive players to sit back, space the floor and watch. Instead, the HEAT are already setting up a secondary action on the weakside. The Bulls’ weakside defenders focus on one side of the floor while another option develops right in front of them.

“Particularly with Dwyane, CB or LeBron on the weakside, they have the freedom and option to duck-in on that weakside post – or occasionally they can even go to the strong-side post,” Spoelstra says. “That’s what [LeBron] is reading right here. He just sees an opportunity to anchor in. We run the pick-and-roll, it can be live, but as we move it he can post up. Now you play against a player like Luol Deng, you really have to anchor and sit down.”James patiently reads the defense, backs Deng down and finishes with a drop-step – a counter-move to defenses shading him away from the middle of the floor that he’s worked on for years – but from a team perspective the key is where he’s able to catch the ball. By the time James turns his back and commits to the post-up, he’s a step away from the paint. Not so a few years ago.”We typically used to post up LeBron too far out on the floor,” Spoelstra said. “Or against good defenses, if we did start him in the deep post, we would get pushed out to 16-17 feet because of our inability to work together to ensure a deep catch.”There’s no shortage of moving parts in this type of possession. Wade and Bosh have to run their action, James has to anchor his position against Deng, Allen has to give James the ball when he’s ready for it and both Allen and Norris Cole have to clear out once James makes his move. It may seem like a relatively simple half-court play, but it takes precision to execute consistently. If you can do it; if the individual players trust in one another during the simple plays, then you can build from that foundation and take on more complicated actions.Actions like the early post-up in transition, something that Spoelstra says James, Wade and Bosh all have the option to use.

James beats the defense down the floor, but instead of coming back to the ball as he may have done back in the 2010-11 season, he takes advantage of the vacant paint and anchors his position, trusting that his teammates will make the appropriate read.

“[Mario] now sees that LeBron is taking the post,” Spoelstra said. “He doesn’t make a bad play by throwing it when he’s not quite open. The right play is now, ‘It’s not my play, it’s now Dwyane’s responsibility to make the entry pass’.

“[Mario] reads that and throws it to Dwyane. LeBron is able to seal, fight for that paint position and as it goes to Dwyane and he’s able to make that play. The next level of that [possession] is that if Dwyane can’t make the play, [Mario] then cuts through and here comes Shane and now Shane gets an opportunity [to make the play].”

Angles and timing is all it is, but its taken years to create such a fluid offense. Watching film of possessions like this, Spoelstra commented that they’ve had to devote quite a bit of time to the details. Some plays can be made on instincts, but you have to work on screening with a purpose, sealing your man on the high side of the floor to open up the wing entry pass and working the triangle passing to find the best angle all while reading the other defenders on the floor to make sure there’s no weakside help on its way.

Working the details gets everyone on the same page, and that earns a level of comfort. It’s important to note that these often aren’t specific play calls that Spoelstra makes from the sidelines. By working these situations in practice and building up trust, Spoelstra has built a system that doesn’t require micro-management. When the opportunities present themselves, the players can work what they know not what they’re being told.

The results, over and over again, speak for themselves.

“This took us a long time to be able to work five guys working together to get LeBron the deepest catch,” Spoelstra says. “Before, this probably would have turned into him catching the ball too deep or us not even being able to deliver it. Now guys have trust, he knows how to seal, guys are reading the angles of the defense better and using the next player as the better passer and not feeling like you have to make the play yourself.

“It’s five guys working together to get a deep catch for the best available shot. That’s takes a lot of work and trust and habits. Just drilling it and making the proper reads. This is the culmination of three years.”

Three years spent building towards something special, and a year after setting the league record for effective field-goal percentage – accounting for the value of three-pointers – Spoelstra has his team on pace for one of the best and most balanced offensive systems we’ve ever seen.