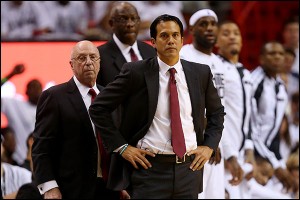 Planting a seed: Spoelstra set tone in training camp for another HEAT run to NBA Finals

Back in September, when the Miami Heat assembled to begin training camp, Spoelstra addressed his team about furthering its championship legacy and how rare it is for a team to find its way to the NBA Finals in four consecutive seasons. “We’ve never brought it up since then,” Spoelstra said. It’ll get brought up now. […]

Erik Spoelstra has either the easiest or hardest coaching job in the NBA. Here’s why it could be the easiest: The Miami Heat coach has at least four potential Hall of Fame players in LeBron James, Dwyane Wade, Chris Bosh and Ray Allen on his roster, and perhaps the deepest bench in the league. He […]