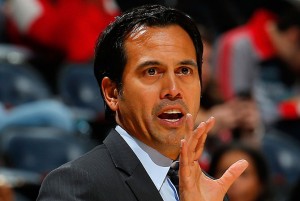 To get an early assessment of the Miami Heat’s potential this season, you could’ve picked any number of individuals to examine in their season opener against the Charlotte Hornets. You could’ve focused in on Hassan Whiteside. The Heat big man is as unpredictable as he is crucial for this team, but if he can be […] 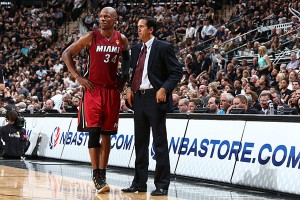 Erik Spoelstra And A Winning Pursuit

Erik Spoelstra needs a thing. You know, a thing. His thing, a signature move, so to speak. Red Auerbach smoked his cigars on the bench. Pat Riley wore his stylish attire (I mean, the guy had a collar named after him.) Phil Jackson waved his incense and passed out books. What is it, exactly, that Erik Spoelstra […]

Four seasons into the Miami Heat‘s Big Three era, there probably aren’t many more books, motivational methods or clichés from coach Erik Spoelstra that LeBron James, Dwyane Wade and Chris Bosh haven’t experienced. They “held onto the rope” after a rough start during their first seasons together to get to the NBA Finals. James, Wade […]

Erik Spoelstra for coach of the year

“But what did he do?” I can hear you thinking. “Any coach can roll the ball out for those three guys and earn a bunch of wins, right?” I could build a case that simply keeping the Heat doing what they do for this long merits serious consideration for Erik Spoelstra as coach of the […]