The Development of Norris Cole 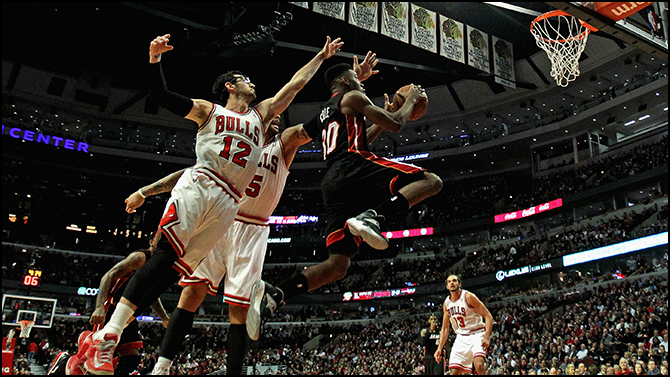 It’s a few days after Christmas and Norris Cole receives an outlet pass as he blazes down the court in Portland, Oregon. Mo Williams is already back on defense, but Cole is one of the quickest players in the league. He can beat Williams and get to the rim. It’s the same play he made hundreds of times as the featured offensive player at Cleveland State. Just turn on the jets and go.

But he doesn’t. Cole catches the ball and maintains a measured pace. He keeps his head up and scans the floor ahead. There’s Michael Beasley coming up on the other side, finger pointed to the sky calling for a lob. Cole waits. Portland’s Myers Leonard is screaming down the middle of the court, racing to catch up to Beasley. Cole lets him fill the passing lane.

Then he stops short of the paint. Cole has found his Hall of Famer.

The pass that leads to Dwyane Wade’s dunk isn’t a complicated one. Yet sometimes it’s the simple actions that best show off a developed maturity in a player. Maybe Cole makes the same assist three years ago when he was a rookie, maybe he doesn’t, but Erik Spoelstra has had his staff drill Cole over and over on these situations to make sure the right pass gets made. Speed to the rim for the quick two if it’s there, but recognize the situation. Find the openings, dribble through the lane if you have to and always know where your finishers are.

Whether it’s Dwyane Wade and LeBron James ready to meet the rim face-to-face or Ray Allen trailing the play for an open three, Spoelstra wants Cole seeking efficiency. So Cole ran through the same drill – aptly titled ‘Find Your Hall of Famer’ – for years.

When the HEAT acquired Cole (via draft-day trade) in the Summer of 2011, it didn’t take long for Spoelstra to recognize what he would be working with.

“To be able to go coast-to-coast, to be able to impact the game with his speed and quickness – that was the first thing I remember jumping off the screen,” Spoelstra says.

Spoelstra and his staff also quickly identified the areas that needed improving. College players can typically get away with trying to jump over people, particularly around the rim, by virtue of being one of the most athletic players on the floor. Once you hit the professional level, however, the athletic playing field is leveled. It takes a little more skill and guile to navigate the trees in the paint. There are habits to shake.

Three years prior the HEAT had drafted another point guard that needed to work on the same parts of his game, so with the process proven by Spoelstra and assistant coach Dan Craig’s work with Mario Chalmers, the plan was already in place.

“[It was] particularly because of Norris’s speed, quickness and the ability to get into the paint that he had already proven in college,” Spoelstra said. “But at the next level those could be dangerous plays as well. Those could be blocks and turnovers if you don’t get to the next layer of skill development.”

And through hours or early morning and late night with Craig, Cole continues to hit those next layers. The HEAT wanted him to improve his decision making in transition – to learn when to attack, when to pass and how to create contact – and whether you factor in assists or not Cole has produced more points-per-possession on fast-breaks every year he’s been in the league.

But there was still work to be done elsewhere.

The same habits that college guards deal with in transition on the pro-level also tend to crop up in the half-court. They’re still quick and athletic enough to turn the corner off a pick-and-roll and get into the paint, but instead of being met by a chain-link fence at the rim they’re suddenly running smack into mobile brick walls equipped with aerial defense systems.

So when Cole first came into the league – during a lockout season in which Cole had practically no offseason or training camp to help him ease into the league – it wasn’t a problem for him to get to the same places as he would back in school. Where the team could help him was in choosing what to do once he got to his spot.

“Just this initial part is what makes Norris effective on pick-and-rolls,” Spoelstra says. “It’s his burst of speed and the aggressiveness to be able to attack and get around the first line of defense – which is the two players out at the three point line.

“When he gets into the paint we want him to be aggressive. We want him to create opportunities for us by getting two feet in the paint, but his rookie year these would all be blocked shots and he would take off from here [pointing to the spot shown above] and it would turn into a block or turnover because he would run out of the runway.”

The solution was the extra dribble. Cole would sit down with the coaching staff and pore over film of the San Antonio Spurs’ Tony Parker, focusing on how Parker keeps a live dribble in the paint and either catches helping big men off guard or buys time to find an open shooter. Instead of getting into a high-jump contest in the paint, Cole now has an expanding arsenal of moves to use in the paint thanks to time spent running the Tony Parker Drill with Dan Craig.

Sometimes it’s a change-of-pace floater against an off-balance help defender, as Cole used to finish the possession shown above against the Jazz.

Or that floater could come earlier as Cole beats the defender in the air not by jumping higher, but by jumping first and beating the big body to the rim with the ball.

“He had to learn how to develop that layup,” Spoelstra says. “Which is the quick layup before the shot blocker can time it. He spent a lot of time on his finishes, and because of his quickness and his athleticism he should develop into a good finisher at the rim. It’s just taking a little bit of tweaking up to his technique.”

Sure enough, new technique has led to new results, and Cole has improved his shooting percentage at the rim in each of the past three seasons, shooting up from 48.8 percent his rookie year to 53.7 through 34 games this season.

As quick as he is, Cole wouldn’t always be able to get to the rim. Nor would he always have the ball in his hands playing with such prolific teammates.

At Cleveland State, Cole ran one of the more pick-and-roll heavy offenses in college basketball. That meant that when Cole shot the ball, he typically was doing so off the dribble. There weren’t many players creating shots for him. That was Cole’s job. So it wasn’t all that surprising when Cole came out and hit a handful of mid-range shots to score 20 against Boston in his second game as a pro. But Cole was still an athlete then. The HEAT wanted to turn him into a shooter.

“This was part of his game,” Spoelstra said. “Now the one difference now is, [Dan Craig] has done a great job of drilling his balance. For an athletic player, often times your balance suffers because you’re athletic enough to work it out but that also leads to inconsistency. He was a very good pull up jump shooter from college but now his balance and reading when to shoot that shot, has gotten better.”

“The fact that he can organize and get us into offense much better than he did two years ago is critical for [the bench unit],” Spoelstra said. “But the development of his three-point shot and the corner three is arguably the most important improvement.

“Now our game doesn’t change with him, [Mario Chalmers] or [Ray Allen] in there and quietly he’s becoming one of our more effective corner shooters from three. I love it, and the players love it when he’s open from the corner.”

In the HEAT’s system, being able to shoot from anywhere on the floor – and particularly the corners – means you can play in any lineup. Cole can shoot from the top of the key, from the wing or from the corners (48 percent on 29 attempts this year), and he’s also developed into a good enough cutter that, just like Dwyane Wade, he’s a threat to attack the defense before the swing pass even gets to him.

It always takes a little while for NBA defenses to adjust to improved shooters, but Cole is getting the respect that a floor-spacer deserves this season. Why shouldn’t he, when he’s improved incrementally from mid-range, from the corners and in catch-and-shoot situations each season? Why would a defense play off a player that, factoring in the value of threes, is effectively shooting over 53 percent from the floor after posting a number around 41 percent his first season?

None of this matters if Cole isn’t a willing participant.

Every player will experience statistical fluctuations over the course of his career. That’s the game of percentages. But for Cole to incrementally improve across the board in each of his first three seasons – after joining the team as a 23-year old rookie, no less – speaks not only to the coaching staff’s commitment to what Spoelstra calls the Growth Mindset, but to Cole’s desire to better himself.

It’s common for NBA coaches to describe younger players as sponges, but when Spoelstra says the same of Cole it’s not a throwaway line. He has a body of evidence to back it up.

So when Cole was given the locker next to Shane Battier, he noticed that Battier was getting an extended scouting report loaded with advanced metrics before every game. Soon enough, the rookie approached the coaching staff and said, ‘I want the same thing.’

And when Ray Allen was signed before last season, bringing in the shooting and treadmill routines he had been using for 16 years, Cole said, ‘I want to do that, too.’ Now he takes the early bus to games with Allen.

“He stays with [Dan Craig] late and he keeps an eye on what these guys do,” Spoelstra said. “LeBron has his weight routine that he’s developed over the years that he feels help him keeps him healthy and strong and peaking at the right time, so Norris said he want to do that program.

“It’s not a coincidence [that he’s improved] and you love it when guys are pure and that dedicated. For a young player he’s also one of our leaders and to do that on a veteran team like this really speaks to his character.”

And all along, Cole has had the support of the staff. Head coaches don’t have as much time to spend on player development as assistants, so Spoelstra has to delegate responsibilities and trust that the work is getting done. With Cole and Craig, there’s never been even the inkling of doubt.

“DC and Norris have been a perfect match,” Spoelstra says. “They’re both grinders, they’re both dedicated and committed. Whenever Norris wants to work, DC is there for him but not only on the court. It will be with film study, it will be with statistical studies and it will be with analysis of next level information that a lot of players don’t want. Norris wants it. You can’t give him enough and that’s why you’ve seen steady progress each year.”