Tested by the Past, Erik Spoelstra Takes on Challenge of LeBron-Less Future 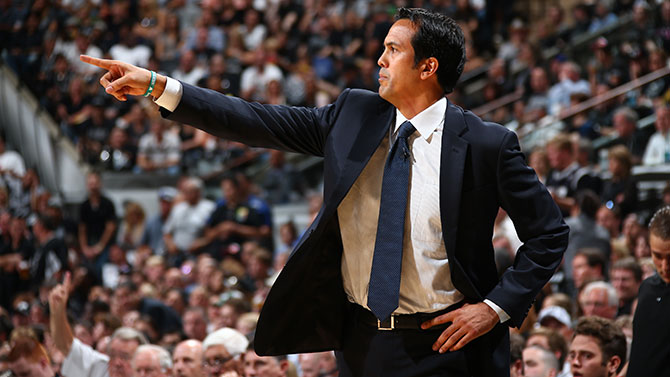 Erik Spoelstra always appreciated the unique nature of the opportunity, not just for someone with his unconventional beginnings, but for anyone. That was apparent from the official opening of the Big Three era and even several weeks later, just before Christmas 2010, when he was chatting casually on the court of the U.S. Airways Center after a comfortable victory against the Phoenix Suns.

By then, the Heat had recovered from a surprisingly rocky beginning and had begun to roll, with 13 victories in 14 outings, on their way to 21 of 22. By then, Spoelstra had already survived two flashpoints when, if he’d been in some other organization, he might have been relieved of his responsibilities for some perceived greater good: The first came as the Heat were recruiting LeBron James and Chris Bosh over the summer, the second after “Bumpgate” and reports of a player insurrection accompanied a 9-8 start.

And there would be plenty of controversies and supposed calamities to come, with failures in two NBA Finals sandwiching two championships. Still, through it all Spoelstra rarely appeared shaken, let alone stirred. That self-security seemed to stem from a simple, soothing realization that the former video coordinator shared that night in Phoenix: “The way I look at it, I’ll be able to look back in 25 years and know that I coached this team.”

Read the full article on BleacherReport.com.