Spoelstra in the Philippines 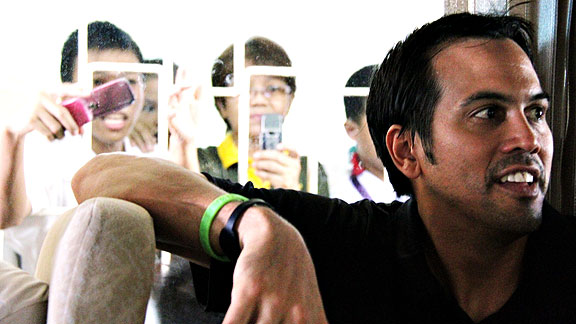 Somewhere north of the U.S. Embassy in Manila the white charter bus carrying Miami Heat coach Erik Spoelstra made a wrong turn. The group, which included Spoelstra, two NBA employees, a handful of bodyguards, and a driver, was headed toward Torres High School, where Spoelstra planned to lead a basketball clinic. For now, however, they found themselves crawling through the cramped alleyways of Tondo, the most densely packed district of the world’s most densely populated city, where more than 600,000 people scrape out a living in three square miles along the banks of Manila Bay. While the panicked driver jabbered into his cell phone about a missed stoplight, Spoelstra and company stared through the windows at Manila street life: pedicabs zipping around the lumbering bus; children being bathed in plastic basins along the sidewalk; and freelance trash collectors pushing wooden wheelbarrows, beseeching anyone in earshot to donate “diyaryo’t bote” — newspapers and bottles.

More from Rafe Bartholomew on Grantland