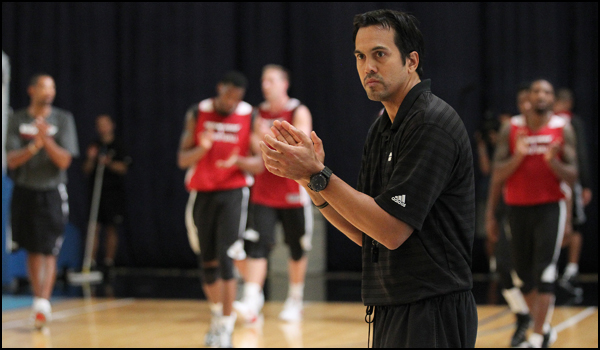 You couldn’t then, but today you could because unlike in those early months – whether they were going 9-8 or nearly December-and-0 – this is a team that knows how it wants to play. Space. Pace. Pressure. Attack. You’ve heard the buzzwords, but they’re only buzzwords because the team practices what it preaches. Erik Spoelstra started using that language years ago, and from those words he’s forged one of the clearest team identities in the NBA.

Now that Spoelstra knows exactly what he wants his team to do and the team knows how to do it, watching film has become an exercise in maintenance. There’s still some puzzle solving here and there, particularly in the postseason, but during the regular season there is an existing solution for almost any problem. You went here, we want you to go there. We took this shot, but there was a better shot just a pass away. Every bit of slippage has a prescribed step to recovery, and slippage is easy to spot when everyone knows what they are supposed to be doing.

Throughout this season, we’ll be sitting down with the man who helmed the reinvention of the HEAT for a little time in the film room so he can explain what should, could, does and doesn’t happen on the court. And to warm up, we took a look at the HEAT’s best offensive game of the NBA Preseason – against the San Antonio Spurs – coming off a low-scoring affair in Brooklyn.

“Now this is one our bread and butter offenses,’ Spoelstra says. “They’re playing against zone right now. We started to go through the process three years ago against Dallas – when teams tried to zone us and we made a call, we would short circuit. So no matter what now, whatever our call is, if we notice they are in zone we stay in it. And we stay with our movements, and then we move to our zone principles – which are to penetrate the gaps, move the ball, try to attack inside out, it’s very similar to our man-to-man.”

Spoelstra clarifies that this isn’t a high-horns set as has become a popular term among fans lately. This is their elbows offense, designed for the ball to hit the man on the free-throw line and not work around him.

The rest of the possession is simple HEAT principles. Finding the gaps in the zone, moving without the ball, spacing the floor and putting pressure on the paint. We’ll get into hard cuts to the rim with Spoelstra in a later post — they’re one of the most important team developments of the past three seasons — but here we should emphasize that movement without the ball isn’t always a hard cut. Watch what Chris Bosh and Dwyane Wade (in the left corner) do after Bosh sends a pass to James Jones on the right wing.

Since the Spurs are in zone, Tony Parker isn’t going to chase Bosh as he jogs into the lane. Bosh then becomes the responsibility of Tim Duncan, who in turn has to release Mario Chalmers into the left corner. The problem for San Antonio, with the ball quickly flipping back to Udonis Haslem on the right elbow (occupying Parker), is that Duncan’s release of Chalmers leaves one player (Kawhi Leonard) defending two players on the weak side of the floor.

One skip pass from later, and Chalmers is attacking a scrambling, collapsing defense as James Jones gets an open look in the corner.

Another corner three, after the HEAT set the single-season record from those spots last season, all on instincts and principles. This is system basketball, not playbook basketball. The HEAT have some special plays they dial up in specific situations and we’ll look at those as the season goes on, but there is nothing more important to Spoelstra than the process. If the process is good enough, he’s more than happy to relinquish control and let his players play.