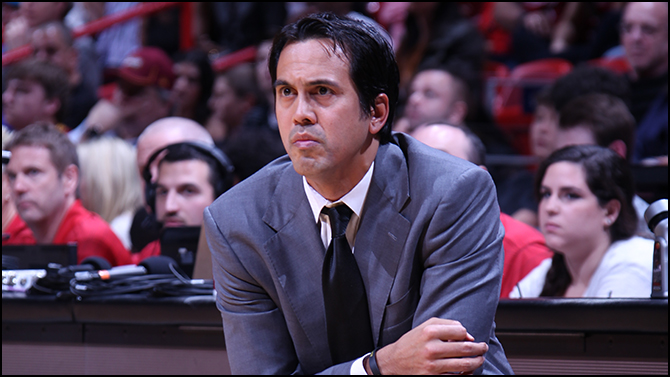 Each Christmas, Erik Spoelstra gifts a new book to his players. In the past, he’s given out Paul Sullivan’s Clutch and Stephen E. Ambrose’s Band of Brothers, among others. With each book, there’s an accompanying message, and this year, after back-to-back NBA Championships, the message is right in the title of Fred Hassan’sReInvent: A Leader’s Playbook for Serial Success.

Why did you choose this book to give out to the team?

Erik Spoelstra: The initial thing that caught my eye was the title. As I was contemplating and brainstorming for this season I was struggling to find a motivation not only for myself but for the team – how we can approach this year differently knowing we would have to be better. I received this title as a recommendation from a friend and from there I immediately bought it and dove into it. It was a terrific message for all of us on how to approach this new challenge.

Hassan goes through many examples divided into two sections, improving yourself and improving the team. Are there any examples he gave or lessons that you particularly took to heart?

Initially, what I liked is that it has to start with you. How are you going to reinvent, how will you improve, how do you break a barrier and get uncomfortable? That’s a key concept in the book, getting out of your comfort zone. [Hassan] calls it the “Discomfort Zone”. It’s so much easier just to stay with what you know, stay with what you’re comfortable with and think that that’s enough. To break through and improve you have to get into that discomfort zone.

How do you do that?

By constantly pushing for new ideas and working on new things within the context of what we’re trying to do. For me, that meant looking at more efficient ways to do things with our group by looking at different concepts offensively and defensively without making us play in a different way. For our players, even the older veteran players, how can they add to their game?

The second part is how to be able to incorporate all the individuals improving into the team concept. Doing that is the hard part.

It was interesting that all of what he’s talking about is the business world, he was in pharmaceuticals, and he has a product to sell. So whenever they’re trying to reinvent something they can actually find a new challenge or a new product to tackle whereas you kind of have the same thing every single year – you can’t give them new teams to play.

But the philosophy of always trying to improve and doing it differently, if it helps you, is the same. What I started noticing after I read the book is all around the business world you see the companies that have died because they couldn’t stay ahead of the curve. Then there’s best companies that have constantly been able to reinvent and remain not only relevant but absolutely needed.

Some of the lessons in the book both you and the organization seem to have already applied in terms of the culture and bringing in the right people, so while you were reading did you think, ‘Well, it’s good that we already do that?

Yeah, and it’s great to be part of an organization where you have forward thinkers. The best thing Pat [Riley] has always taught me is to think big and think ahead. He’s always been a forward thinker and I’ve always found that fascinating about his approach.

What did you take from your personal perspective in terms of improving yourself, both in terms of tactics and leadership skills?

That was one of the primary reasons I wanted to meet with football coaches during the summer. I met with Chip Kelly, Pete Caroll and Butch Jones to dig deeper into managing personalities and leadership and motivation. Football coaches have to do that on a daily basis as well. In all walks of life it ultimately becomes about managing and leading different personalities and I’ve found it incredibly valuable seeing how football coaches did it with a different sport and different schematics but with similar challenges.

Football would actually be seem to be a bit outside your comfort zone in a sense because the team has so many more players on it, which forces the coach to delegate within what are basically small sub-communities made of up dozens of people.

That’s one of the main reasons I went on those visits. I didn’t want to come back just the same. Even with the experiences we had together, if I was going to ask our players to better themselves then I better be doing it as well.

You’ve obviously had to manage a unique group of personalities over the past few seasons, so as Hassan mentions how do you go about making sure their voices are heard and not creating an autocratic culture here?

I don’t think there’s a text book on it. We’re all learning and feeling our way. With our group, we’ve been through so many things together. We’ve really gotten to know each other on a deeper level, and now there’s a trust there. Our guys want me to coach them and motivate them but they are also an experienced group and they do have a voice and they want to be heard. That has taken time for us to be able to develop that symbiotic relationship. We’re each helping each other, there’s a trust level, and that took part of my reinvention to be able to allow that.

What’s the most different thing about you as a coach today as when you took over the head position?

That trust and communication is better. Initially when any coach first comes in you want to set your plan and your philosophy, and you think that the less deviation there is then the more consistently you’ll get to all of it. But with this group it’s different. More player-to-coach, coach-to-player and player-to-player input was better for this team.

Taking this franchise out of the equation for a moment, if we were going to apply the ideas that Hassan talked about in this book to any other NBA franchise it would probably be San Antonio, right? There have been so many different iterations of that team over the past 15 years.

There’s no question, and there’s a real fine line with this concept of reinvention. You don’t want to just make wholesale, categorical changes just for the sake of change. You have to know what the foundation is first and what your core values are – those don’t change. But certain little tweaks here or there are what keep you ahead of the curve. San Antonio has proven that as much as anybody over the years. They have the San Antonio way of basketball but they’ve emphasized different things each year to play to their strengths.

What main message do you hope the players take away from this book, perhaps if they think back on it for a moment during the playoff stretch?

My main message is I truly hope, at that point [the playoffs], we’re already doing all of this. We have so far and we’re a different team from last year. We’re putting ourselves in a position to be a better team than last year. Time will tell ultimately but that’s our goal.