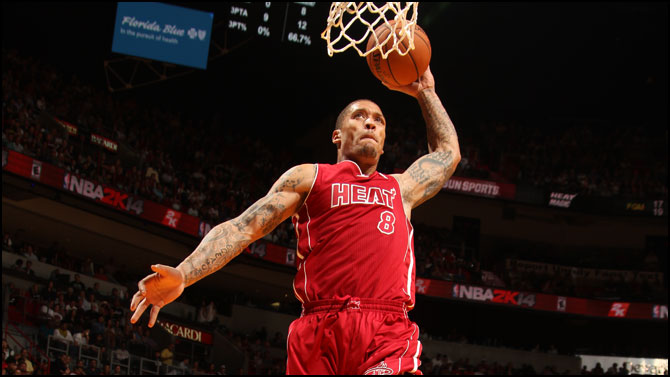 Michael Beasley played the role of defensive specialist on Friday in Toronto in the final five minutes of the Heat’s victory and on Monday said this is the first time in his professional career that a coach has trusted him.

Heat coach Erik Spoelstra inserted Beasley into the game after the Heat blew a 20-point lead.

“It feels good to be trusted by Spo on something other than offense,” Beasley said. “It’s definitely different than what I’m used to.”

Asked when the last time a coach trusted him on the basketball court, Beasley named Frank Martin, his coach at Kansas State.

“Spo has trusted me before but it’s different now because I think my rookie year, Spo had to trust me,” Beasley said. “We didn’t have too many choices. Now, we have a full roster and everyone can contribute. He can put me at the end of the bench and forget about me for 20 games.

“And that’s not him doing it consciously, but we have so many guys that can do so much. So when he calls my name, it speaks a lot. But, like I said, I can’t get complacent. I can’t get comfortable. I gotta keep going.”

Beasley entered Sunday’s game against the Bobcats in the second quarter and played nearly nine minutes. During that time, he led all Heat players with four rebounds to go along with two points.

Beasley’s role is ever changing to begin the season. He played a prominent offensive role against the Cavaliers last week, closed out the game on Friday in Toronto without taking a shot and on Sunday finished with four points, seven rebounds and a steal in 15 minutes.

“With this team, like I said before, and I’ve been screaming all year, I’ve got to find something else to bring to the table,” Beasley said. “It’s not going to be the same thing every night, but it’s got to be something.”

Spoelstra said making Beasley feel like “he was part of our family” was important from the beginning.

“We drafted him and spent a lot of time with him,” Spoelstra said. “We wanted to open up our arms and welcome him back into our family. It was, ‘Hey, come back to the family.’”

Beasley is playing under a non-guaranteed contract for the veteran’s minimum after being bought out by the Phoenix Suns.