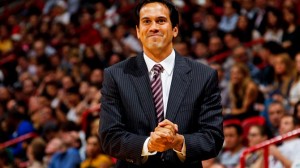 There’s an old saying that hindsight is 20-20, but good leadership is often the result of being able to predict the best path for the future based on what you’ve just seen — having, to put it another way, better vision than the next guy. And it was indeed just that sort of vision that clearly saved the day for Miami HEAT Coach Erik Spoelstra, during the team’s remarkable and unprecedented March 3, 2014 game against the Charlotte Bobcats. The Miami basketball coach took a few moments during his regular post-game briefing to the press to offer comment on the spectacular night that was had, both by the record-setting LeBron James and the Miami HEAT organization. The final score, 124-107, turned out to be far more than just the team’s eighth win in a row; and it turned out to be far more than just a continuation of a great winning streak for the team and coach Miami fans were counting on to take another NBA championship as they begin to set their sights on the playoffs. It was also the night James broke two standing records by sending in 61 points in one game. That tally broke his own personal single game scoring record as well as that of the franchise itself, and by a healthy five points at that. Before he played for Miami LeBron had managed 56 points in a single game playing for Cleveland back on March 20 of 2005, during a game against Toronto. As an interesting coincidence, 56 points in a single game was also the standing shooting record for the entire Miami HEAT franchise, set by Glen Rice way back on April 15 of 1995 — during a game against Orlando.

One might have been forgiven for predicting these records were in jeopardy well before the 61st point was scored, just by keeping an eye on the ball — and specifically the ball when it was being expertly handled by a clearly driven LeBron James. During this game against Charlotte, James was well on his way toward the record before the halftime buzzer — tallying 24 points in the first two quarters — and he upped the pace after that, managing to tack on another 25 points before the end of the third quarter. Miami head basketball coach Erik Spoelstra was obviously paying attention, and told reporters after the game he’d noticed the “great groove” LeBron was in well before he approached the scoring record. But, according to the sage Miami HEAT basketball coach, he’d planned early in the game to pull LeBron and keep him benched during the fourth quarter. Fortunately for LeBron James the Miami HEAT coach thought better of it, and he stayed in. The rest, as we say, was history.

Spoelstra saw what was coming down the line from James — a game that was ratcheting up and turning into a night to remember from a player you’d never go out of business overestimating. As the HEAT superstar continued his relentless attack on the Charlotte defensive players, there was no doubt things were going to get better the longer James kept on the court. “It was a special performance,” said Miami basketball head coach Spoelstra. “There was an efficiency to what he was doing. The rim certainly looked like an ocean to him.” And LeBron kept hurling balls into that ocean, scoring points and setting further high water marks. In addition to point and field goal records, by the end of the night he’d racked up additional HEAT franchise records for both the most points scored during a single quarter (25 points tallied in the third quarter) and most points scored in the second half — 37, as it turned out, including a spectacular 30-foot three-pointer that had fans of both teams staring with their mouths open minutes before the third quarter buzzer. That shot was part of, according to the (hopefully) joking Miami HEAT coach, basketball playbook discipline; he called it a “designed play” and said the team had been “working on that one for a while.” Here’s hoping we see more of the same from LeBron and the Miami coach in the HEAT’s upcoming schedule.