From ‘The Dungeon’ to the top: Erik Spoelstra’s rise with the HEAT 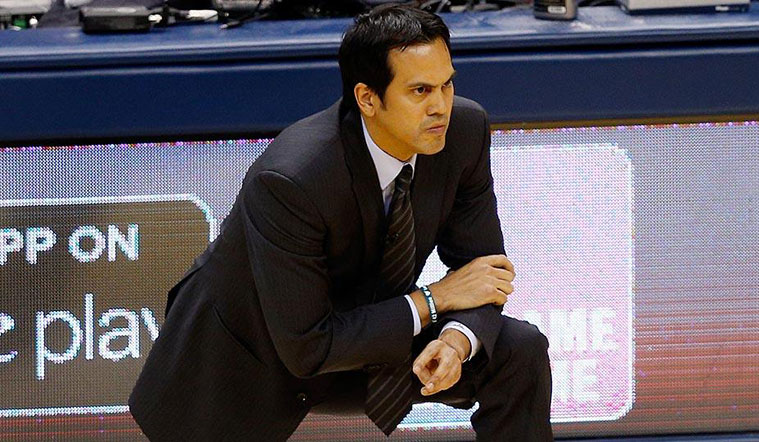 On the first Saturday in September, the last player on the court at La Salle High in Miami is a senior guard named Jacknelson Joseph, perched on the left wing in purple shoes and rainbow socks. Jacknelson is a defensive stopper at nearby Calusa Prep, but this evening he is working on his three-point shot, unleashed with a smooth lefty stroke. A coach straddling the half-court line fires go-ahead passes at Jacknelson’s belly and beams as he lets fly. The coach does not critique the player as much as himself. “Oh, that pass is too low. . . . I’ve got to hit you in the chest. . . . There’s another bad one. . . . Can’t have an empty assist. . . . Got to see it go through.” The coach, who owns two NBA championship rings and has reached the past four Finals, is entering his fifth straight hour inside this sweatbox with the nun painted on one wall, the priest on the other and a lion roaring between them.

Nine months ago Erik Spoelstra established a basketball academy in Miami for about 250 boys and girls ages eight through 18 who participate on the AAU circuit while standing apart from it. Nobody gets cut. Everybody plays. Financial aid is based on need instead of talent. Spoelstra writes the rules, suggests the drills and frets over the positioning of the video cameras that record practices. He hires high school coaches—parents are banned from the bench—and requires them to run a read-and-react offense, which emphasizes cutting and passing rather than pick-and-rolls and isolation plays. Zone defense is strongly discouraged. This summer a couple of Spoelstra’s younger squads lost games by 40 points, which disturbs him not at all. He is far more concerned with their eye contact in the huddle. “We’re trying to teach skills and behavior,” Spoelstra says. “We’re not trying to create a superteam.”

Read the full article on SportsIllustrated.com.